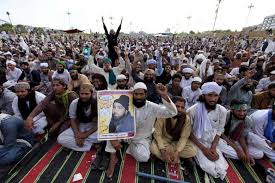 A suicide bombers blew himself up in Lahore in the public gardens of Gulshan Iqbal, killing 63 people and wounding more than a hundred. On the same day about two thousand people poured into the main street of Islamabad, for a sit-in protest in front of parliament. The origin of it was the death sentence, executed in late February, of Mumtaz Qadri, a bodyguard of the former Punjab Governor Taseer Salmaam, “guilty” of wanting to undo the crime of blasphemy, and that in the country is one of the 27 crimes that can bring to the death verdict.

Easter massacre was claimed by the terrorist group Jamaatul Ahrar, the most powerful affiliate Tehreek-e-Taliban (TTP), as a deliberate attack on the Christian minority that was celebrating the  holy day. In reality, Christians dead (religious affiliation in Pakistan is declared in the identity documents) were 17. Number that little has imported the national and international press, so that the incident was so labeled; while those living in Pakistan are well aware that many terrorist attacks in the individual groups are cleverly used to sustain the continuation of a state of alert in the country and give the green light to “security operations” by the army and police, who are conferred special powers, which by now have became commonplace. To die thus on Easter were unfortunately Muslims and Christians, which does not diminish the severity of the event but favours the reasoning can be done to try to understand why these terrorists act in Pakistan. ISIS in the country is not officially present, but it is known that especially in the north they enlisted fighters; in the country there are different groups of fundamentalist terrorists, who over the past year have as main target the police and clamouring for the approval of sharia law by the parliament.

It is not difficult for the leaders of these groups do followers and remain anonymous: the level of illiteracy and ignorance of the population puts Pakistan in the last places in the world rankings; so pay groups of people and get them to show (not counting the very unreliable numbers provided by several local news sources) is easy. And after four days of talks and threats, in which the capital was cut off from all telephone communications, the government has ceded on all fronts: the representatives of the fundamentalist parties were able to obtain that the blasphemy law will be not touched, that the two hundred arrested during the unrest also for having destroyed and put out of the metro bus, the newest line opened a few months ago and still far from being set free. Same tone used for numerous protests the new law passed in Punjab in defence of women victims of violence and while two days ago in Karachi a demonstration of teachers who demanded recognition of merit and salary increase, saw an unprecedented police charge to disperse the demonstrators. The defeat of the government policies do these days more and more apparent and the elements to keep in mind to observe Pakistan in its role of standard-bearer in the international arena are numerous: the complex alliance with the US government in the name of the eternal struggle to Afghan terrorism; the fundamentalist militancy that civilians and soldiers massacred, the persecution of religious minorities who do not enjoy any protection; poverty, nuclear threat, overpopulation and so on.

The game being played in Pakistan is obviously part of the major terrorist scenario that is shaking more than a continent, but too easily stigmatise the motives of massacres and attacks will not help the understanding of a complex phenomenon of such magnitude as to make often difficult and needless to even grasp the possible links.