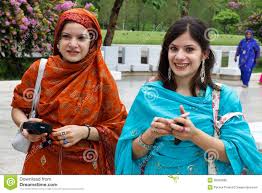 The distinctions are always due. Always us to say that Muslims worlds are many and varied (and as the more religious and wise say that there are many Muslims, but only one Islam), we are many  to debate long on female identity represented from wearing the veil or slavery imposed on those who are forced to wear the burqa and niqab. Different worlds, they said. The conservative Pakistan where I live, and Uganda from which I have just came back, where the Muslim minority (about 20%) coexists peacefully with Christians, Catholics, Urdu, Sikhs.

But what is the look that rests on me, white Western, three years living in an Islamic republic? The answer is complex, but what is certain is that the reaction to that / those looks invests my woman’s body in a strong way, shapes it symbolically, sticks it in clothes that are far away from the world to which I belong, providing applications and effects psychosomatic that required a long averaging time.

Modulated differently – depends on social and education of my interlocutors was – attitudes toward me are almost always the same. Is she Western? First of all I am automatically a drinker, preferably of whiskey, the alcoholic beverage par excellence: so when I go to a new home where guests transgress the rules and drink, a large glass of whiskey is offered to me as if it were sparkling water. I go in the pool as many other foreigners in the city: it is an international hotel and many Pakistanis come to see women in bikinis. The representation of repressed sexuality, marriages arranged by the families of any social stratum, the legal prohibition of having sexual relations outside marriage (obviously never met but shake forcefully in secret), deform the fantasies for freedom that a Western female body ” grants. ” So, if the friendships become a bit destination, the questions become intimate and embarrassing; by contrast the most women trust men to their concerns and frustrations in their intimacy, because they know they face an opposite-sex partner who can at least listen. Depression is epidemic: Pakistan is one of the Southeast Asian countries where the use of psychotropic drugs is widespread. Among the most hilarious questions are those concerning the nudist beaches: how many, what happens there. They are imagined as an area of ​​free space fighter and  they remain deeply disappointed when I explain that it is instead of protected places of freedom of bodies, where children are welcome and the voyeurs are hunted badly.

Yet. Many people think that we abandon our seniors in centers where they perish in solitude; we work a few hours a day and earn a lot. The visa requirement for Europe is steadily rising, between young and old and, beyond networks of brokers who steal money to all applicants procuring false and unnecessary documents for travel abroad, no one cares to know how is the country where they would like to go, although there are TV and newspapers to tell. Because in this case – when the dream – no mention of refugees and asylum seekers – something that is not there to dominate, the mirage of a life that does not know even remotely, but no doubting the freedom . The political affiliation is accompanied inextricably to the religious one: you’re Christian? no I am not a believer. Then you are a Marxist?

Women. I’ve never had so many difficulties to have female friends as in Pakistan: women distrust the one of the other because they haven’t strong relationships with each other, are grown in the priority dream of marriage and a foreign woman is a threat in many cases but also, and more painfully, the fear to confront. Of course this is not true for all matches but to become intimate with them is really hard: affable at the first meeting, according to vanish. Because everything passes through the body, the way you dress, talk, shake hands with men, smoke in public, gestures and ways they do not granted.

In the big cities I have no need to wear the veil (as well as the Pakistani) but I wear almost always shalwaar kameez, traditional tunic and pants and dupatta, the Indian style sheet that still covers the shoulders and arms, and for those who want the head allows me to rotate freely in the car and in the markets, to maintain a low profile, although it is clear that they are not one of them, but the adjustment is appreciated and seen as a sign of great respect. In rural areas, on long bus trips and small towns the dupatta is strongly recommended, unless you want to stop the traffic and be seen by all: a bit ‘like the Japanese, the youngest ask you a picture with them. In short, at the end of a day’s work in the field, tired of being the object of so much to look at is exhausting.

Now the problem in my opinion is not only the inconvenience of moving bodies from one country to another, from one culture (think about how they are viewed in Italian women who wear the full veil in our streets), as the compelling value that the body imposes variable to the clash of cultures. And as if in this moment of history were moving avatar rather than human, bodies separated from souls  and needs, enemies on the borders of unknown cultures. And at the end the bodies, dead or alive, are paying the highest price.

Now I want to come back to drive the scooter, hug a friend on the street, enjoy the freedom that many before me and I have won in my culture, no matter how differently ill can also be it: wear a skirt, after three years . At the same time I wonder what will happen to our sex sisters who now live in the West fearful and distrustful?