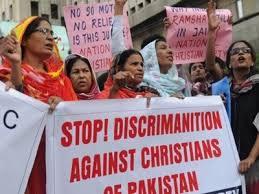 The world tries to hide the persecution of Christians,  Pope  Francis said yesterday commenting on the massacre that took place in two churches in Lahore, which caused 15 deaths and numerous injuries.

In fact, while it is true that the close of Islamic fundamentalism is claiming victims even in the Christian world (even if the majority of the dead is still Muslim, remember), Pakistan comes on the pages of our newspapers only this last event, precisely because on the Christian community (nearly one million only in Lahore). It makes us feel more than usual because, our generations never had seen the Christian world under attack, how it feels to be “minority.”

In fact they are all minorities to be under attack in the country (yes this has reminded Federica Mogherini on behalf of the EU): three weeks ago the Shia mosque in a hundred kilometers from Karachi, even before the Hindu minority and another in Quetta in Baluchistan.

If it is difficult to respond to friends in Italy and colleagues who ask me what Pakistani think about the terrorist threat that has hit Europe, because it seems almost rude to say here they do not talk that much, because even we don’t care about what’s happening here.

Pakistan is under an internal attack that lasts for a long time: the military operation against the Taliban in North Waziristan will stand while paying off (first on the skin of the nearly two million refugees who are still suffering the bite of winter north of the country, in Bannu, then on that of the same soldiers who have lost their children in the massacre of Peshawar last December), but in the cities there is no security to be protected by the bombers who blow themselves up. There is no way to stop them, there is no particular way to prevent them entering the city, because we talk about cities with millions of inhabitants, including many people ready to protect the fundamentalists, to hide them and their bombs. Not just in the madrassas, where children are sent to study because they do not cost anything: we are talking about people able to bring weapons and explosives in places where the detector usually also identify the clasp of my hair in my pockets.

Every day, also in Lahore, through the check point, I open the car boot, men control with mirrors if there is anything triggered under the car. But I am also a target, a target less. A target helpless watching the angry crowd, tired of crying even deaths in the family and among friends, lynching two suspects, who is angry also with the police accused of not doing enough.

So on the one hand the government’s inability to develop a security plan that puts away the city and its inhabitants, merely deploring the attacks. Other citizenship is angry but not yet organized, active, conscious: today not only Christians were to manifest, but also all Muslims, closing schools, offices and shops, maybe inviting Christians to pray in the mosque. No, this still did not see it in Pakistan: the failure of the political consciousness and fear of many make all return home at night, watching a reassuring news, apparently far from a threat, which has already knocked several times on the outskirts of home.